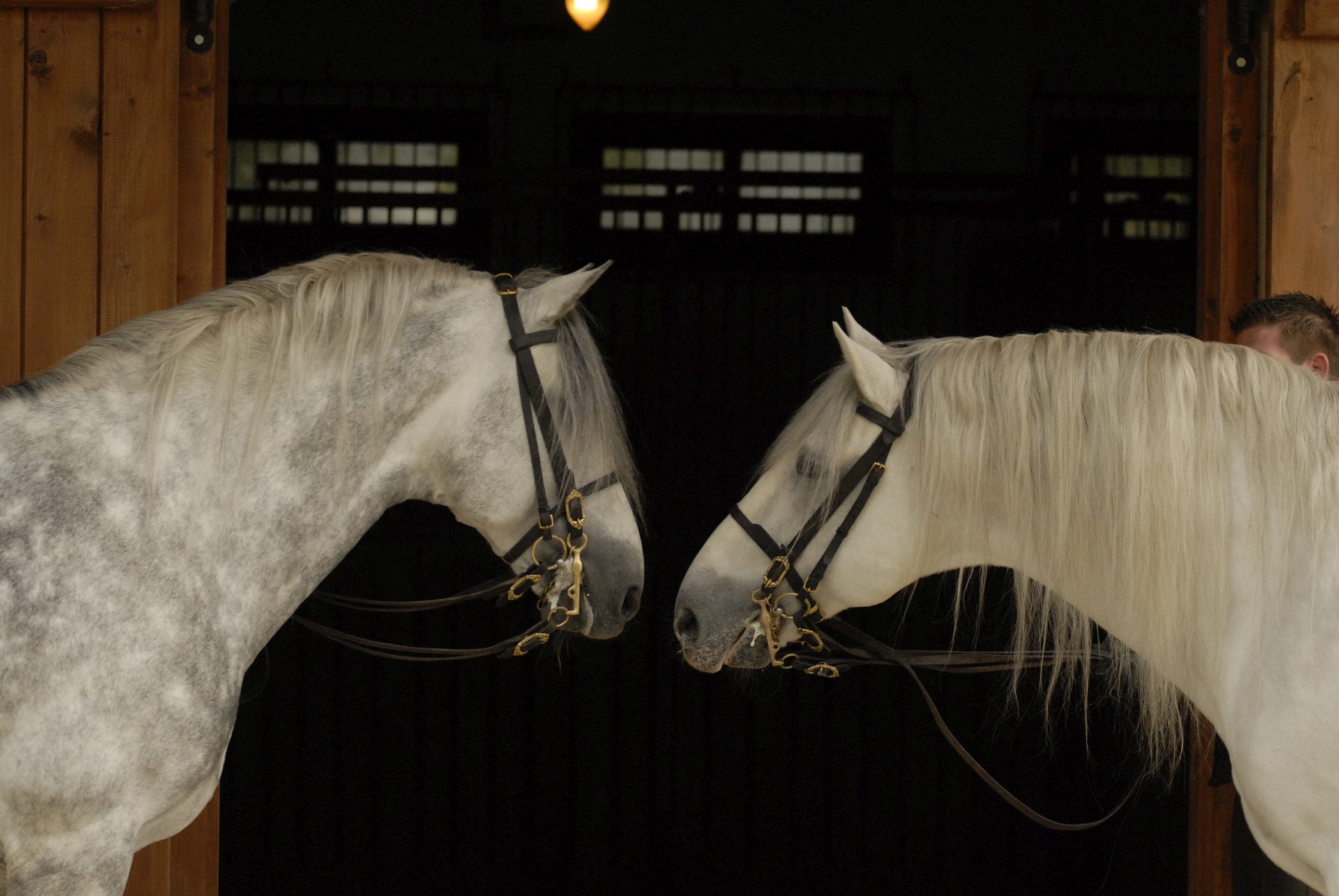 Our stallions were carefully selected in Spain with strict criteria ensuring the highest standards with the aim to create a strong and high-quality foundation for the breeding of Spanish horses in Hungary. The stallions which we brought to our stable were the first Pure Spanish Horses in the country for centuries. In full knowledge of our great responsibility we chose our stallions from the most ancient and prestigious breeders in Spain, in order to ensure that multiple important bloodlines be represented in Hungary. Since then, with our assistance a number of high quality P.R.E. (Pura Raza Espanola) mares have arrived in our country.

Since 2008 we have owned our own mare stock. The mares come from the world-famous Domecq stud. They carry old bloodlines which, by now, are rare even in Spain.
Also in 2008 we acquired nine highly trained Domecq-bred stallions among which are elite breeding stallions such as Osado XV who participated in the Aachen World Cup.

The Domecq family are an integral part of equestrian culture in Spain and have been at the vanguard of equestrian bull-fighting, while also being founders of the Spanish Riding School in Jerez. They introduced and amalgamated modern Western-European dressage in Spain at a time when the Iberian Peninsula was hermetically sealed from modern equestrian sports. The Domecqs are also board members in perpetuity of the National Purebred Spanish Horse-breeders’ Association (ANCCE). They breed not merely with the appearance and movement of the horses but also test them in everyday work with bulls, bullfighting, Haute école and professional sports, as well.

Our stallions and mares alike come from the same bloodlines as Grandero, Merchero and Invasor, all three of whom have participated in Olympic Games as members of the Spanish Dressage Team. Invasor and rider Rafael Soto were members of the Silver Medal winning team at the Athens Olympics.

In 2009 we won the coveted ‘Best International Breeder’ title of ANCCE which was handed over during the annual SICAB event.

In our stud six foals are born annually on average. They are raised in separate yards for mares and for stallions. Once they reach the age of three, their training begins.

A majority of these horses remain at the Riding School and participate in our shows and, through breeding, carry on the bloodlines of their parents.

Every year we offer foals and young mares and stallions for sale.

As there exist a number of breeds which can trace their routes to the Spanish horse, it can be used for cross-breeding or out-breeding. Iberian and South American breeders have created a number of breeds which today have their own associations and stud books, such as the Hispano-Arabe, or the Azteca, which combine Spanish horses with the Anglo-Arabian and the quarter horse respectively. Both are widely popular breeds with many virtues and often used in bullfighting and other activities which require a high level of training and discipline. In Hungary our stallions have covered Lipizzaner, Shagia-Arabian, Anglo-Arabian and half-bred mares, as well as Friesians. The first foals of these mares were born in 2005. The successful breeding processes and the genetic potential of our stallions have ensured that the owners of these mares are our satisfied customers and as a result the number of mares covered by our stallions has increased over the years.